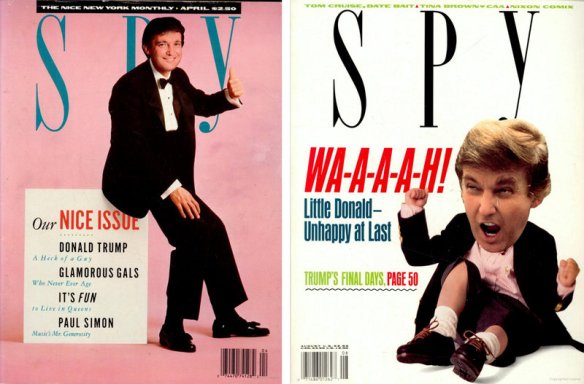 two Spy covers feature Donald Trump, who was frequently criticized in the magazine by co-creators Kurt Andersen and Graydon Carter.
Via Google Books

While they called themselves “the New York monthly”, they didn’t confine themselves to topics solely about New Yorkers and life in all the boroughs and in the early years it was funny — laugh out loud funny.  Better than Saturday Night Live on a good night.  They poked fun at just about anything (the virtually indestructible Twinkie), politics and politicians (including three then current presidents), contemporary culture (fictional characters who apparently live in the same neighborhood since they all had the same phone exchange), celebrity and The Donald bashing (sent him a $.13 check which he cashed) and more.  No topic or person was sacred.  The Mob:  a Mafia entrance exam, map of where they lived and died in NY, Mets vs. Yankees chart (unofficial chant for Mets: “Let’s Go Mets”, unofficial chant for Yankees: “Boston Sucks”), analysis of garbage thrown out by the rich and famous, lifestyles of rich dogs, an L.A. edition, even advertising supplements done in Spy style…It was smart, funny and intelligently written.  Some of their photo covers were outrageous. 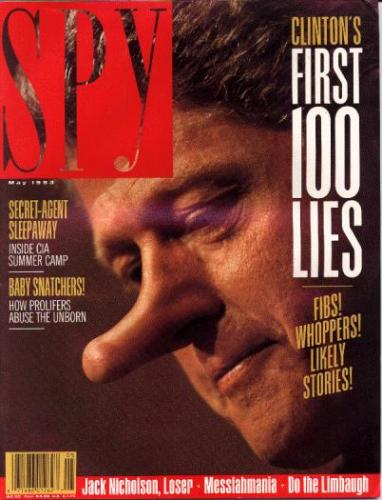 Bill Clinton as Pinocchio May 1993 cover

a parody of a Demi Moore Vanity Fair cover September 1991

The magazine started before the internet, before PhotoShop, before there was “Politically Incorrect”, “The Daily Show”, long before “Last Week Tonight with John Oliver”.  It was like no other magazine — of any size, its format style since been imitated.   There were stories within stories, gatefold pages, stories printed that forced the reader to turn the magazine vertically…It was chock full from cover to cover.  The column “The Fine Print” (set in fine print as a sidebar) was not to be missed (the slush funds of numerous senators across the country, the effect of weekend softball pickup games on healthcare and politics), the “Separated at Birth” feature was sometimes eerily accurate, the “Letters to the Editor” were outrageous, especially when they replied, maps (not limited to New York) and charts and graphs that would never be printed anywhere else, a calendar of events of ‘enchanting and alarming upcoming events’ and feature stories that wouldn’t be found anywhere else.

While waiting at the copy machine one day I started relating one of the articles to a colleague who bust out laughing and asked me where in the world I was getting this information.  I briefed him on Spy magazine and then every month — after I’d read the latest issue — would pass it along to him.  Despite being a transfer from Bayou territory, he understood the humor.  Once he was on the phone and I held up the latest issue in his office doorway.  He wildly waved me in with “Hand that over!“ gestures.

And then came the issue with “The Year With Lies” (October 1988)  in which one of our sister divisions was cited.  Whoop.  Whoop.  I definitely needed to pass it along.  That’s when I found out that while I had been traveling, my colleague had wound up in the hospital for emergency surgery.  Got his home number from his secretary and spoke with his wife.  He had told her about the magazine (“Oh, you’re the one”…yeah, guilty.  Hey, it was regional education.) and she agreed that reading the latest issue would cheer him up.

In looking through the archives my subscription started early 1987 (Carrie Fisher on the cover).  The founders even published a book about how the magazine was created and run — including all the shenanigans and threatened lawsuits (mostly by The Donald) while they were in charge. Appropriately enough it’s titled “Spy The Funny Years”.

For a quick rundown on all The Donald bashing, this article and this one from a former contributing editor to the magazine nicely recaps those years.

When I let my subscription expire (years before they ceased publication in 1998), they called me — yes an actual phone call – to ask why I wasn’t renewing.  (sigh)  They just weren’t as funny as they used to be.  Perhaps they should have sent me the Spy logo t-shirt as an enticement.

In this day of series reboots and series based on movies (from the not so distant past), we don’t need a reboot of Spy.  It can never be duplicated.  Those days are gone and citizen journalists are far from the caliber of talent the magazine had.  However, the archives are available online here — absolutely free — although you won’t get a pair of Ray Bans with the Spy logo.