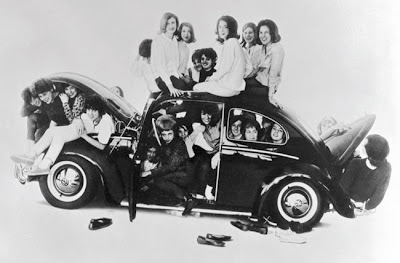 Long gone are the days of Volkswagen stuffing. Granted, no one actually tried driving with 18 or more people crammed into the (original) Beetle, but we would stuff 8 into a Ford when I was growing up: 4 adults, 4 children for a day trip or a vacation — even crossing state lines.  There were no seat belts, no child car seats, we packed ourselves like sardines and someone always got the ‘hump’ seat.

These days my parents would have been fined for such an act.

Even after the introduction of seat belts in the ‘70s (1970s), college road trips almost always involved car stuffing. I can remember driving home for Thanksgiving, 3 of us cramped in the backseat — with luggage that didn’t fit in the trunk — of a 2-door Datsun designed to only seat 4 with the front bucket seats pushing our knees into our chins.  Then we sat through 3 hours of bumper to bumper traffic until we reached the first rest stop in our home state… Our driver bought the three of us in back giant sucker lollipops as a reward for our feat of endurance, not one of us having said a single word of complaint for the previous 3 hours.  Fortunately I was the first drop off stop since it was a tortuous ride and being the shortest, I got the ‘hump’ seat.

A new child seat law recently went into effect in my state, because the state deemed the previous law as “vague“ and “antiquated“.  Antiquated in less than 30 years?  The old law stated that all children under the age of 8 must be in a car or booster seat.  The new law states that rear-facing seats must be use until children are two years old and weigh 30 pounds.  At age four and weighing 40 pounds, children can then be placed in front-facing seats then use booster seats until the age of 8 or are 57 inches tall.

Are the best interests of the child really at the crux of this legislation?  Car safety features have improved and statistics cite lower auto accidents since the 1970s and while studies claim that injuries may not be as fatal for rear-facing child seats, does anyone except me remember the feeling while riding in the way way back of a station wagon?  How about the way your stomach lurched on amusement rides when they went in reverse?  Then there’s the fact that no driver can clearly see the child and can’t be sure if the child is sleeping or actually stopped breathing…These are reasons why I’m glad I’m an adult these days and don’t have reason to drive wee ones.

And what’s the deal with the 57 inches?  Everyone grows at different rates and some of us never grow very tall.  This just opens up the arena for bullies that grow faster and taller than their classmates.  I happen to know adults who are less than 5 feet tall.  Does this mean they should be riding and driving in a booster seat?  Will it become illegal for anyone under 5 foot to get a drivers’ license?  (Let the discrimination lawsuits begin!)  There have been plenty of reports that airbags are most dangerous to those who are less than 5’ 3” tall.  Clearly the front seat is dangerous regardless of age for anyone under 5’ 3” not only with regard to airbags, but also that the position of seatbelts is not a ‘one size fits all’ — in any car.  Stop short and that seat belt can cut across your windpipe leaving you gasping for air.

And the politicians state that the new law applies to anyone from out of state driving within the state.  Seriously?  The law went into effect while it was still tourist season.  There were no checkpoints or stops set up.  No town wants to mess with potential tourist dollars, and if you only enforce the law for state residents, then that’s called screwing the residents.

While some days being an adult isn’t any fun, millions of us grew up without seatbelts or car seats, cars were built like refrigerators on wheels, it wasn’t illegal for children to walk, bike and play all over town unchaperoned, we didn’t wear bike helmets or knee pads, parents didn’t complain about school lunches or demand special foods, no one was allergic to peanuts or gluten and we survived — intact.

This new law may be beneficial for padding political pockets, fund political campaigns, generate a new revenue source for towns and states, but it doesn’t really benefit children or the adults who are their chauffeurs.  Because there is a punchline:  school buses and trucks with no back seat are exempt from the law.

The only reason to envy children these days is that they get fabulous vacation time from school.  And don’t sing Randy Newman to me.

Each life is a journey. Each of us a collection of stories about that journey. Paths are chosen filled with people and places and experiences. This blog is about the ones I’ve known along the way.

© 2012-2024, A Life Traveled. Unauthorized use and/or duplication of this material without express and written permission from this blog’s author and/or owner is strictly prohibited. Excerpts and links may be used, provided that full and clear credit is given to alifetraveled with appropriate and specific direction to the original content.