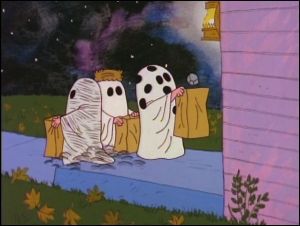 Halloween has become a very lucrative event.  Parties, parades and sometimes over-the-top decorating.  It’s become the second most decorated holiday in the country.   Houses and yards are adorned with lights, inflatables, props of all sizes and mechanical objects to create a horror movie scene, complete with special effects of music, sound effects and fog.

When I was a kid, it was all about the costumes and going door to door to get the biggest haul of treats.  Maybe 1 in 5 houses had a pumpkin on the porch.

A single pumpkin on a porch looks lame these days — even if it’s carved.  If you’re not going to create a movie set on your property, then you need to have a pumpkin patch complete with bales of hay, cornstalks and scarecrows.

If Halloween fell on a weekday, we would race home from school to don our costumes to go trick-or-treating so that we could hit as many houses as possible before bedtime.  On weekends, we started our rounds in the morning.  At my house, there was a price to be paid for the opportunity to beg for food: we had to hand over all the Mr. Goodbars we scored to my dad or else we had to forfeit our entire bounty.  This was in the day of full-size candy bars.  The ones that now cost more than $1.  These days, everyone gives out the one- and two-bite sizes.

And we scored big.

It was The Innocent Age and food was not referred to as ‘fun size’.

Then there was the favorite neighborhood house one block over from mine.  Comic books.  He had a limited supply and they were all different and only one per person.  You had to be wearing a costume and when he ran out of comic books, he gave out change instead so that we could buy our own.  Trades among ourselves were not always possible.

Had we known how much money they would be worth in our adult years, we’d have stashed them in our parents’ safe deposit boxes.

As we grew to junior high age, we’d stopped at home for dinner, stash our cache before continuing at night in other neighborhoods with an empty bag.  Sometimes if my mom was running out of candy to give out, we’d give her whatever we got that we didn’t like.  For me, that meant Mounds, Almond Joys and candy corn.  We were at the forefront of recycling/freecycling.  My brother — having watched Charlie Brown too many times and my mother running out of candy one year — filled treat bags with fallen leaves figuring the kids would never know they got tricked until they got home.  He was older, so he missed out on the Great Years of Halloween Heists.

One year my friends and I decided to hit all the businesses on Main St. before heading to another part of town.  D insisted we couldn’t pass up the bars.  L and I were sure the bars were not prepared with candy and were rather dubious but we weren’t going to let him go in alone until D said “beer nuts”.  Oooooh.

So we quietly entered the bar and timidly said “Trick or treat.”  The bartender looked at us as if Scotty had just beamed us down from the Enterprise.  “This is a BAR.  What do you think I’m going to give you???”   Beer nuts we asked.  He realized he had them and gave each of us a pack.  We politely thanked him and ran like hell out of there before he could identify us to the authorities.

At the Sweet Shoppe we got chased out because he wasn’t going to give away merchandise for free, and we avoided the dentist because we didn’t want to listen to a lecture on tooth decay, but emboldened by our success at the other bar, we confidently strode into The Redneck Bar at the far end of the street and yelled out “TRICK OR TREAT”.

The bartender and all the patrons burst into laughter.  “Ya think I’m gonna give y’all a beer?”  We shook our heads no.  “BEER NUTS” we demanded.  And the entire bar got quiet.  After a long moment, one of patrons looked at the bartender and shook his head in the affirmative.  Yeah, he knew there were beer nuts to be had and we scored another pack. Then everyone in the bar decided that beer nuts sounded good to them too and there were beer nuts all around.  We sauntered out of that bar.

It was an excellent time to be a kid — full-sized candy bars, comic books and beer nuts.

My comic books got recycled by the time I was in college due to space limitations, and the Pez dispensers probably got tossed sometime in high school, but I still have a stack of trading cards.