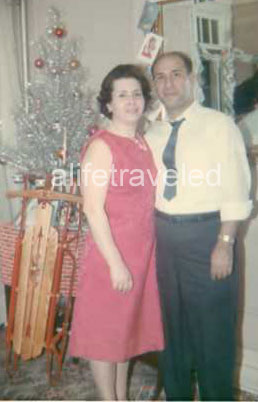 The first pain of Christmas is not finding a tree, but getting it in the stand – securely, and centered, so that once you remove the netting it doesn’t topple over.  This is especially tricky when you are a force of one, but finding a volunteer is elusive.  Some would prefer root canal to this seasonal activity.  Borrowing the pickup truck to get the tree home, yes, fitting the tree in the stand, no.  The sweating, the swearing, the scrapes.

I didn’t always have a live tree for Christmas.  There were six of us in an apartment and some of us sat on the floor to watch TV, so there was no room for a live tree.  I don’t even remember seeing live trees for sale in my city neighborhood.  So we had a fake tree.  My mother bought it.  She thought it looked so pretty on display in the store, which is where it should have stayed.  It wasn’t just a tinsel tree – which they all were at that time.  It was silver tinsel, three feet tall.  It was bad enough we didn’t have a chimney and Santa didn’t drink milk, but the more than obviously fake tree really put a crimp in the ho ho ho.  And because it was highly flammable, there were no lights.

That tree moved with us from the city to the house in the burbs.  Now that we had more room – and a yard, we really wanted a real tree, but my mother refused to give up the tinsel in exchange for greenery, the yearly cost, the scent of pine, the needles that would linger for six months afterward.  It took us a few years to finally convince her to let us have a real tree – or at least a green one.  And thus, the mythical magical $10 dollar tree was born.  At first they cost $5 at the PAL.  In a few years, the sibs and I went to find a tree without my mom since she was never keen on a real tree, but she’d give us the money to buy one.  Then as the prices started going up, we would pool extra hard-earned money (we didn’t get an allowance) to buy the cheapest one – though it still had to meet a certain level of acceptability:  no Charlie Brown trees.

Years went by until we asked her for a few more dollars.    She balked.  She threatened to pull out the silver tinsel tree.  But we convinced her to let us put a real tree.  After all, we were the ones who did all the decorating.  And still, we pooled money.  One year she asked for change from her $10 bill.  We told her there were only Charlie Brown trees for less than $10 and we really had to have a really nice looking tree.  She was not pleased – $10 for a dead tree – until it was decorated.

Finally the year came when my dad decided – without telling us – to find a tree in the daylight so that we wouldn’t have to make our way around at night in a dark lot.  He thought he was doing a good thing.  He thought he was doing us a favor – even while he had no intention of doing the decorating.  He told my mother how much he spent.  Yep, she had a fit.  My father couldn’t understand why she was upset.  After all, he paid the market price.  It was the same size and fullness we always had and he thought the price was reasonable.

We shook our heads and sighed.  Dad wanted to know what he did wrong.  Didn’t he find a nice tree?  We explained the $10 tree deal to him.  And he had overpaid.  Dad never bought another Christmas tree.  And mom smiled as she put that dismal, pathetic looking silver tree on display.

After a couple of years with the silver tree, my dad approached us one December, slipped us some money and told us to go find a real Christmas tree.  “Don‘t tell your mother.”