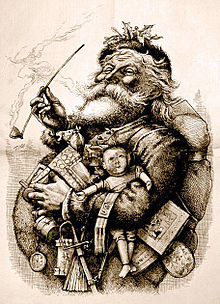 Department store Santas, sidewalk Santas, secret Santas.  Tis the season for fat men in red suits.  I grew up in a city, living in an apartment building that had no fireplaces – real or fake – so I was therefore extremely skeptical about the story of a fat man in a red suit coming down the chimney and leaving presents.  There were presents on Christmas morning, but I found it difficult to believe the story of how they arrived.

My mother tried to convince me that he used the air shaft in lieu of a chimney.  I was doubtful about this theory as well.  Granted it looked wide enough for a man of Santa’s size but the shaft ended in my bedroom of our first floor apartment (which explained the elf-sized closet in the room).  Not only would Santa have to jump a couple of feet from the bottom of the shaft to the floor, but I shared a bed with my sister (who never shared well) and I usually wound up on the floor.  Santa wouldn’t have had much of a chance to slip past me unnoticed.  Or find my asleep in my bed.

Most likely he used the fire escape and came in through the kitchen window.  However, no one would admit to that scenario since that sounds more like the M.O. of a thief, dressed all in black who would take everything in sight instead of leaving gift-wrapped boxes.  That’s the stuff of nightmares not sugar plums.  So the fat man didn’t have a lot of credibility with me.  Clearly I was more logical than, and not as gullible as, my older siblings.

Then there was the business about the cookies and milk.  This idea is somewhat reminiscent  of a pagan ritual of offerings to the gods and goddesses of old.  There is no mention of cookies and milk in the original story by Moore and I don’t know how or why the ‘tradition’ came about, but we would dutifully set out a plate of cookies and a glass of milk on Christmas Eve for the extremely rotund elf.

Every Christmas morning I noticed that the milk and cookies went untouched.  In those days there was not a variety of options for milk:  soy, almond, fortified with extras, 2%, 1%, skim.  There was just whole milk.  Now, maybe Santa was lactose intolerant.  Or perhaps he just suffered from lactose build up by the time he reached our abode.  Granted, presents were still left under the tree, but I found it disappointing and became even more disillusioned with this red-suited man who snubbed the midnight snack left specifically for him.

One Christmas Eve, as we were preparing for another visit from the bearded fat man, my mother noticed I lacked adequate enthusiasm for a child my age.  Why bother leaving a snack that we only had to throw in the garbage the next morning?  So my mother suggested we leave Santa a shot of scotch instead of milk.  Well, what the heck?  We had no chimney, Santa didn’t drink milk and my parents evidently didn’t have the imagination necessary to bribe me into goodness sake.  If he didn‘t like the scotch, my father could drink it.  My dad worked nights.  If Santa had already come and gone and snubbed the shot, my dad would like it.  And if Santa was there when my dad got home, they could have a shot together to toast the holidays.

That Christmas morning I first checked to see if Santa drank the scotch.  He did.  The cookies were still there, but I was pleased that Santa liked the scotch.  Every year after that we set out a bottle of Johnnie Walker and a shot glass.  No cookies.  We might have left some provolone and sopresatta to go with the drink.  It didn’t change the quantity or quality of the presents, but we made Santa jolly.

And everyone had a merry Christmas.