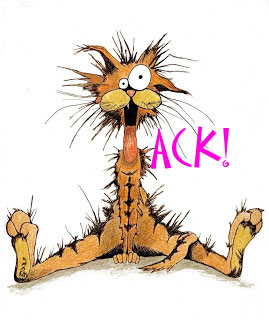 Murphy struck again today.  Damn bastard.  Last week it was the hot water heater.  I was dawdling this morning since it was raining and the four-footed one won’t go out in the rain.  So there I was in my robe, having my morning tea and reading the news online when I heard a ‘chirp’ downstairs.  What in the world?  The little guy sneezes, gets the hiccups, yawns, barks when he feels I’m being threatened, but never chirps.

So I went to investigate the noise.  Everything seemed in place, but it had been a chirp, not a thud.  And I heard the chirp again.  What?  Where?  Must be the batteries in the smoke alarm dying.  In my last house, they were hardwired, so no need for batteries.  So I went looking through my battery stash.  No 9 volts.  Plenty of other sizes.  But then, who stocks up on 9 volts anymore?  Transistor radios are relics, and there are no toys in this house – of any kind – that use 9 volts.  Damn.  Now I had to maneuver the 6 foot ladder from the garage to the front hall to remove the old battery – in my robe – just to silence the chirping, which quickly became annoying.

Took the battery out.  Noticed the green light stayed lit.  Then it chirped again.  What the @$#%@?  So I pressed the button that said “Press to Hush”.  That resulted in all the alarms in the house blaring because they are interconnected.  @$%@!!  After they went on, when I again pressed the ‘Hush’ button, the blaring stopped.  But it still chirped.  So I unscrewed the cover to disconnect the wires.  I forgot that these are hardwired.  Hmm…If they’re hardwired, why the need for batteries?  The previous owner left no manuals for the smoke or carbon monoxide detectors.  In my last house, the units stayed lit even in a power outage – without batteries, never chirped, made of metal not plastic and were so loud they attracted zombies when they went off.

The little guy was in a panic, shaking all over.  “We need to get out!  The alarm went off!  C‘mon.”  Chill.   We’re going out.  Let me get some clothes on first.  And put the hair up.  At least the rain provided a good excuse for a bad hair day.  WaWa no longer carries batteries, so I headed for Shop-Rite.  It was too early for the pharmacy – a reminder never to wake up with a headache – or other ailment.

The unit has a stupid hinge making a tight squeeze to fit the battery.  Had to fight to get it in and close the door.  Still it chirped.  Because they’re all interconnected.  If one battery has to be replaced, they all need to be replaced.  A domino effect.  So I had to drag the ladder upstairs.  That’s when I found I had put the first one in backwards.  Because it wasn’t in the right way, I couldn’t get the hinge open, so I needed a screwdriver to pry the damn thing open.  Once the battery was put in correctly there was finally blessed silence.

In all, it reminded me of a morning back in college, when I was running late – which was pretty typical in those days since I’ve never been a ‘morning person’.  I was running around wet from the shower, warming water for a cup a tea, grabbing the books, drying the hair, getting dressed.  The first pair of jeans needed a belt since I was losing weight and they were too big to stay up without one.  The belt came apart.  So then I grabbed another pair of jeans.  The zipper broke as I was putting them on so I had to rummage for a safety-pin to keep the zipper up since I didn’t have any other pants – or belts.  Then I had to throw on a sweater that would cover the top of the zipper so that it wouldn’t show a pin holding it up.  Then as I was tying my shoes, a lace broke…I only had one pair of shoes.  Yes, I was one of those scholarship students.  I spied my roommate’s clogs.  We did not wear the same size, but I was late, late, late – for work and I really needed the money.  And she never should have left them outside her closet door.  Pulled the plug for the tea, grabbed the keys and books, slid into the clogs and left.  Only to find the elevators weren’t working that morning so I had to run down eight flights of stairs – in clogs that didn’t fit.

When I got in that night my roomie let me know she had seen my Bill the Cat act that morning.  “Oh, sorry.  Did I wake you?”

My alarm woke her.

“Actually I was laughing – until you took my shoes.”

If it’s any consolation, the shoes were not comfortable.