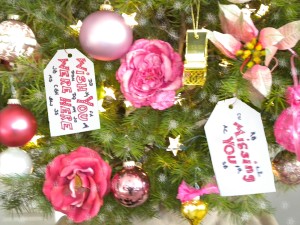 The 12 days of Christmas have turned into 72 days.  The halls are decked before Thanksgiving dinner finished and Halloween pumpkins smashed.  The chant of the season is spend, spend, spend.  People are shopping for Christmas gifts before the Macy’s Thanksgiving Parade has finished – but not at Macy’s.  And Gimbel’s bit the dust some years back.

For me Christmas isn’t about getting presents.  Hasn’t been since I was eight years old.

I’d heard her name mentioned for years in the morning announcements (cutting class) but didn’t meet her until senior year in high school.  Upon introduction, it was as if an electrical circuit had been completed.

There were some faculty members who thought us an odd pair (“What in the world do those two have in common?” and “Oh, that’s going to be trouble.”).  Others smiled at us anticipating results of our relationship dynamics like a chemistry experiment allowed to go unchecked.  We mystified our classmates – individually and as a pair, and some treated us with a touch of reverent awe.  There was some admiration and jealousy in there too.  We dared to be ourselves.

We weren’t typical high school teens.  We weren’t cheerleaders, members of the pom pom squad.  We didn’t believe in cliques yet moved among them all with acceptance by their members.  We weren’t fashionistas, nor did we want to be.  We didn’t sit around gossiping about anyone, nor did we spend our evenings watching sitcom TV or talking on the phone.  (We didn’t have phones of our own, nor did we have privacy for the calls.)  We knew our strengths and weaknesses (even then), couldn’t be bothered with the petty, juvenile behavior of our classmates (competition for being the most popular?  Don’t even think about looking at my boyfriend, etc.).  It’s not that we thought we were more mature.  We just didn’t see any point in the behavior (just nastiness).  And high school wouldn’t last forever (thankfully).  It was just a phase we all had to grow through.  We were looking forward to finding our place in the world beyond high school as adults.

She’d find me in study hall and pull me out of there, smiling, with her throaty laughter, “Hey kiddo, whatcha’ doin’?  Let’s go!”  Off we’d go.  Once we were found in the faculty lounge.  “Well, hey Mrs. S, want some chocolate mousse?”  No.  She let us be.  Yes, we had commandeered the faculty lounge to talk.  A cozy little room off-limits to students.  We had even walked into the kitchen at our senior banquet (held offsite), dressed in formal attire, grabbed a couple of plates and had the chefs cooking to order for us, never questioning who we were or what we were doing in the kitchen, while we talked.  Mostly we just walked the halls talking about political science, economics, philosophy, history…

Wandering around the halls during classes was strictly against the rules, even if we had study hall scheduled, which required students to spend the time in the cafeteria, library or auditorium.  Open campus was not a concept at our old high school.  There was a policy against it.  (We petitioned it for years without success.)  Most faculty who knew us would simply greet us (Mrs. K, Ms. K, Mr. O) and leave us to our rambling meanderings.  However, there was this one faculty member with whom I had already faced in a challenge in previous years (it didn’t go well for him), who came upon us once and naïvely thought he had the ‘upper hand’ – since we were clearly in violation of the rules – and could win a face off against us.  He was just a tasty appetizer for her.

She had charisma.  She had charm.  She could wheedle without wheedling, disarm any argument without necessarily using logic while smiling and using her laughter as a tool in the art of persuasion and influence in negotiating an agreement of her terms….He walked away from us, shaking his head, unsure how he lost the argument.  It had been magic to watch.  And we laughed.

Underclassmen thought we were teachers.  We’d harass them for hall passes and send them to the principal’s office.  Yes, we’d both at some point faced him and came out victorious:  No.  I will not attend administrative detention because my mother forgot to write a note that I missed school due to illness.  Utterly ridiculous policy.  Time cannot be made up.  Assignments, tests, yes.  Time?  No.  It’s gone.  Sitting after school for an hour every day for a week will not change that…It probably didn’t hurt that I was also in the top 10% of my class.  Substitute teachers came to know us and learned to never put our names in for a ‘cut’, lest they suffer the repercussions.  Some teachers would cover for us on occasion.  We knew the names of support staff (thanks Mrs. P for believing in PMS) and even the head janitor (Ralph, thanks for buying me time – and the keys).

We’d gone on to different colleges, different states.  We sent letters to keep in touch.  Then the letters got returned.  And I worried.  One Friday or Saturday night she appeared in my doorway unexpectedly.  “Hey, kiddo…”  And we hugged and held on to each other and then went off in search of somewhere to talk.  On a whim, she had driven some 300 miles to visit, not exactly knowing how to get to my campus or if I was even there.  We stayed up most of the night, drinking bad vending machine coffee and confirming we were living twin lives in different places.  She had transferred schools which is why the mail was returned.  And then she transferred again.  She was still constantly in motion, starting and stopping, expending energy in multiple directions, zigging and zagging, unable to be contained or constrained to any single course.

She had passion – for many subjects and for life itself, thinking outside of herself and her little town.  She had a brilliant mind, yet that wasn’t reflected in her grades.  Grades weren’t important to her.  What she valued was the learning, the questioning, the thinking, the process of becoming educated and the growth.  Her passion extended to the country and culture in which she was born but not raised.  And I was afraid for her passion on the subject when she spoke of support for radical groups of a country that no longer existed.  She was the Julia of the ‘Pentimento’ of my life.

The letters continued for a while before again being returned to sender.  I tried contacting her at each college she had previously attended.  I tried calling her mother and got no answer, regardless when I dialed.  After a few years of not being able to make contact with either of them, I concluded they had both disappeared.

High school reunions weren’t our style.  We never believed when we were in high school that we would ever think of that time as the best years of our lives (please, no….).  I found out from one of the reunion committee members that her mother had let them know she had gotten married, honeymooned with a trip around the world and was living “somewhere in Europe”.  The pain wasn’t so much that she didn’t tell me herself, but the underlying suspicion that she had to live abroad and she had cut off contact with me deliberately to protect me.  From what I’m not sure.  I kept up with international news.  I always believed she’d surface one day, on my doorstep, laughing “Hey kiddo, whatcha doin?  Let’s go!”

Once the internet became available to the masses, I’d find myself thinking of her and would search references of her name.  Year after year there were no results.  Anywhere.

A few years ago, aching to talk with her, I searched the ‘net again and found a result.  A memorial page.  She’d been living about 900 miles from me.  I’d have driven those miles if I had known.  What’s 900 miles between twin friends?  I’d missed seeing her again by mere months.  And I cried seeing her picture, knowing I would never hear her laughter again.  I cried for the moments we would never get to share.  For the shared memories of the teens we once were.  For knowing I will grow old without her in my life again.

A special thanks to patrick at canadian hiking photography and his coverage of Shambhala for the inspiration for this story’s artwork.  I intend to make these permanent ornaments for my tree.