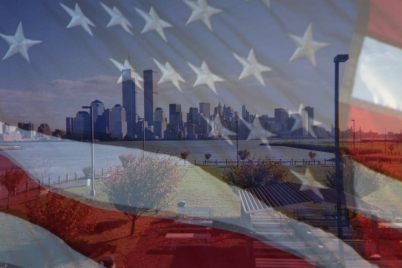 I don’t read the newspaper every day.  I only  get the Sunday paper delivered.  During the week, I read the news online instead.  This morning I noticed a paper on my driveway.  It’s Tuesday.  It’s not a holiday.  When I saw the front page I realized why I received a ‘special edition’ paper.  It’s September 11, a Tuesday with a clear blue sky and temps in the 70s, a gorgeous late summer day  – exactly as it was in 2001.

I woke up that morning and could barely lift my head due to a head cold.  Hadn’t slept much because I couldn’t breathe due to congestion, so I decided to call in sick.  Spent most of the day laying on the couch.  No TV.  No radio.  I needed rest.  Didn’t hear many cars out on the main drag.  Drank lots of water.  Made some chicken soup.  About eight that evening I turned on the TV.  CNN was on.  I don’t usually watch CNN and thought it odd the TV was set to that station.  There was an inset in the right hand corner and I recognized the Twin Towers.  Being still groggy and foggy as I watched the smoke coming out of the buildings, my first thought was someone was making another disaster movie and was using the towers as the subject.  A tape loop showed a plane crashing into the buildings.  It just didn’t seem real.  Then I noticed the news bulletin scrolling across the bottom of the screen that the President would be addressing the nation so I switched to the local news station.  And then, when I saw the buildings crumble, I screamed.  All those innocent people.

I have two cousins who worked across from the Towers.  Had they gone to work that day?  Who else did I know who worked downtown?  Who should I call first?  Did I miss a call?  Checked the phone for missed calls.  None.  Should I call?  What if they hadn’t been able to get home yet?    The Path station was gone.  Were any trains still running?

The next morning a ‘special edition’ paper was in my driveway.  Despite my cold I dragged my butt and head into work: faster internet access.  I needed answers.  I needed to know why.  I needed to be among people.  As soon as I got off the office elevator I saw my boss coming down the hall.  I stopped.  Gave him a little nod.  He gave a small nod back.  We both knew we still had family that worked in The City.  If we were both at the office, then we hadn’t heard any negative status.  There was still hope.

Checked voicemail and email for urgent business matters.  None.  Hit the ‘net for news and info.  Found a survivors’ list posted and started scanning for familiar names, old friends, former neighbors, people I used to work with, people who still worked in The City.  Every 30 seconds the page refreshed making it frustrating.  I found a familiar name.  Lived down the street from my parents.  Was it father or son?  I knew the senior definitely worked downtown.  I wasn’t positive about the son.  Called my mother.  Had she called them?   “I wouldn’t know what to say.” she told me.  Just ask “How’s the family?”

I retrieved a voicemail later that day from a colleague in the Midwest.  She let me know she tried calling the day before and couldn’t get through.  Ma Bell’s SOP for disasters were in place:  block all incoming calls to the affected area from outside that area to make the entire network available for outgoing calls within the affected area for help, assistance and “I’m okay” calls.  Besides, the company shut down all their offices in the metro area by noon that day.  Sent everyone home to be with their families.  My cousin still calls me a saint every time we speak because I called to see if her husband was okay after that day in 2001.  Apparently very few called.  We don’t call each other on the anniversary though.

It was days later when I recalled the previous Sunday afternoon.  Beautiful quiet day and I spent some lazy time out on the deck.  I heard and felt the rumbles of military craft.  They often flew maneuvers over my house towards the water and back, many times in the evening, one or two in a line.  That Sunday there were two vee formations of planes and choppers, side by side.  Extremely low, extremely loud.  Just above the tree tops.  I had to cover my ears.  It was unusual.  Since that time, in these parts, we pay a lot of attention to low flying aircraft – especially military in formation.  Those formations have significance.

There was a program on TV last week regarding people who had been in the Towers that day.  I thought I could see the images from that day again without upset.  I was wrong.  Especially upsetting was the information that so many had no stairwell access to evacuate those buildings or were told to stay put.  I used to work on the 25th story of a 50-story building in The City.  We had regular fire drills to ensure we knew which stairwell to take in case of emergency.  Company policy.  There were two we accessed – on the perimeter of the building since the elevators ran through the center of the building.  It was another reason to commute in sneakers.  One afternoon my boss told us that there was a suicide bomber on the 29th floor.  A colleague had gone down to the lobby for a candy bar or pack of gum and the police wouldn’t let him back up.  All the other companies within our bank of elevators had evacuated the building.  I asked why we weren’t evacuating.  The president and vice president were both off premises that day and our in-charge felt that since the bomb was four stories above us, we weren’t in danger and decided we did not need to evacuate.  The laws of gravity and physics were apparently meaningless to him.  I hope Mr. MBA has reconsidered his thinking about bomb threats and evacuations since 2001.

In this part of the country, some of us simply cannot forget what happened in September 2001, even if we weren’t there that day.